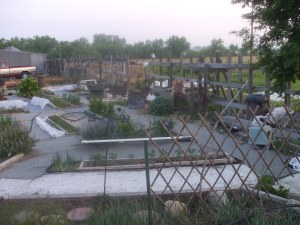 There are never really warnings when something like water resources are going to change. Oh you may see little things if you have the insight of a Native American Indian – but the average person today would not notice (ok, maybe a climatologist).

The eighties in Denver were rough economically. The nineties were flourishing and exciting. Then, at the turn of the century, all that changed. Any modern-day prophet that may have been trying to predict the future in regard to economy based on the past was blown right out of the water! The weather forecasters had the same problem.

The drought that started in 2000 (the year we bought the farm of course- August of 2000) was to last for our first 3 years on the farm. The news people all stated that it was the worst Colorado had seen in over 100 years…oh lucky us!! The first few years of the new millennium, were to be a time of major re-thinking in the way we have done and will do everything farm related! We had drawn up garden plots, planting thoughts, critter pens and the like. Well now, due to a major water shortage, we were faced with re-planning (is that a word?).

Looking back I think this was all a blessing. We spent 3 years in major drought and learned a ton-of-stuff just through our trial and error efforts! We learned the different ways to water and what worked best for our Colorado weather and soil. We learned how to do things “naturally” – meaning without the aid of chemicals. When you have farmers all around you that have to use huge machinery loaded with chemical (some organic but most not) compounds to save their crops, it very hard to go green. They would spray and by that afternoon we would be overloaded with their pests.

When you want good food that you can share with family and friends, having monster pests is not easy. We tried fencing off for rabbit control – ya, that didn’t work! The little buggers know just how to dig underneath them. So we found that wormwood was something they didn’t like – we now have it planted in a number of places – good-bye rabbits (or at least most of them)!

We also found that our house cat – Tigger – loved to catch baby bunnies – YUCK!! But it helped to control them better than the coyote’s did out here. He actually brought one back up to the house one day – and the cute little bugger was still alive? Being animal lovers (but realists – if an animal is hurting, you put it down!), we put it in a box, gave it some food and water, and waited till the next morning.

Well, we woke the next morning to an empty box? Where was the baby bunny? Tigger slept with me locked in my room for the night, so we know he had nothing to do with it. The bunny looked like death warmed over when we put it in the box, so we were sure it would be dead by morning – but he pulled a magic act and disappeared! We searched everywhere and no rabbit. To this date, never found that baby bunny (think that is where gremlins or angels stepped in).

Our first drought year also forced us to make some hard choices. We purchased cashmere goats and angora rabbits so that we could sell the fibers, not the animals.

Well, cashmere goats only get combed every spring, 1-time a year. Angora rabbits are very VERY high maintenance! They were constantly getting their hair matted and tangled so they needed to be cleaned and brushed almost everyday. When you both work off the farm to keep the finances going, then are trying to save a garden so that you will have food to put by, spending tons of time on critters that are a hassle is not feasible. The rabbits were the first to go.

We knew our goats would bring an income, although very meager, within 5 months. Since that is how often they birth, and it only takes a couple months after that to sell off the extras (usually males) that we couldn’t use-no worries, they are keepers. They at least provided enough extra income back then to assist with their feed and mineral supports.

The gardens seemed to be a constant struggle also. We found that when you have a drought, every weed in the territory will appear. The cacti went into hiding, but the goat-head stickers were in abundance! The bindweed also found was a thing that can get out of control in a heartbeat. After a lot of trial-and-error, we found out that our ducks and geese loved goat-head flowers. If you can get them into the area when they are in flower stage, they will eat them thus creating no stickers – yea! The bindweed took a little more trials (with a lot of errors) and tons of talking with locals and referring to our books (yep, we have a huge pile of all kinds of gardening books).

Turned out our best defense came from a natural method – vinegar! Of all things – vinegar- who would have thought? I know it was good for a great number of things, but when used straight, and extremely carefully, it will kill off just about any plant –including bindweed. The tricky part is you have to use a closed container (just a small one so that if you accidentally knock it over, you wont spill on something you want to keep – yes, I did that and killed off one of my best pepper plants) and a sponge. Semi-soak the sponge and wipe it on the bindweed leaves. Works perfect!

We found that it did not work on the goat-head weed though. Apparently it only works on the bigger leaf plants. We also use it to kill of the grass/weeds that pop up between our bricks in the patio – just don’t get it close to trees, flowers or bushes you want to keep.

The drought years taught us how to grow in long rows for minimal flooding purposes and in plots to limit the area of weeding. The one thing we didn’t learn until much later is what to do with the walkways between the plots and rows. We tried tilling – nope. Tried lying down weed barrier cloths – nope. Tried letting things grow up and then mowing them before they could produce flowers or get to long – nope. Nothing we did seemed to work. We even tried the newspaper plans. Ended up with newspapers and straw mulch flying all over our property and across the road.

Oh, did I mention we have almost non-stop winds out here? That is unless its about 100 degrees out, then we have no wind. We also have high altitude issues. Not like living in Denver or the Rockies height, but just enough to make things challenging. I couldn’t contain my raspberries in Denver, but can’t get them to grow out here? Found out that our heat is so intense (from the high altitude) that they need partial shade to grow.

Hmm, was never that way when we were kids in Wisconsin. We had about a 30×30 foot plot of them as kids, and loved to attack them in season! Our gardens now look like something out of a magazine. To see them from a distance looks beautiful! Nice clean plots with, what looks like, a colorful cement walkway. Surprise – its not cement! Cement for all of our garden space would not be very cost efficient.

Another one of our trial and errors was actually a happy “light bulb” moment. I use a piece of old carpet or rug to sit on while I weed (saves my butt from stickers). So, about 5 years after the drought it finally dawned on me – old carpet! We started it couple of years ago. Lay down a heavier duty weed barrier (not the least expensive stuff – feel it before you buy-you can tell it’s a heavier duty cloth), place your carpet sections over top then use garden stakes to hold it all down (we use the “U” shaped ones – also works best for hold connecting pieces together).

When the carpet, or a piece of it gets too worn out from the elements, simply cut that section off and throw it away. Then replace it with a new setup – works fantastic! Now the only weeds we have to contend with are in the plots and periodically on the edges! Saves a ton of time and effort and, I am thrilled to say, has found a way to repurpose old carpets.

My previous job of 10 years was with the local government housing authority office. Through that I made a lot of landlord connections. They were always complaining about having to rip up tenant damaged carpets on carpets that were not that old (if there is a bad tear or burn in the center of one – the whole thing usually comes out), then having to pay extra to have the trash people (city things) haul it off.

Well, I made a deal with a couple of them – if they would cut the carpet into 3-foot widths (or less) then I would take it off their hands for free! They love the idea and to this day I still get pieces nicely rolled up and left at our gate. There is nothing in the carpet that is toxic (or they couldn’t put it near children in apartments – think about it!), why let it bio-degrade in a landfill for years when we can get a second life out of it! By the time we are done with it, there is not much left to dissolve. Most of it is pretty well shredded when the weather, heat and our bodies have left their marks.

That was another thing we learned from the drought years – how to recycle, reuse, and/or repurpose almost everything. We are very proud of that fact. Think our parents would be also-if they were still alive.

Our parents were raised during the depression years, so saving everything for a possible later use became second nature to them-especially our mother. She carried that with her all through her life and I am very glad of that! Some nights when my sister Darcy and I are having our “in our cups” moment (a phrase picked up from our mothers sister Marlene – thanx Marlene! – oh, and it means having a few drinks at the end of a hard work week), we come up with the best re-purposed ideas! The only sad part it that our ideas take so long to appear. We almost always say, “I wish I would have thought of that one X years ago when we were working on…!”

Never fails to amaze me how “out-of-the-box” our thoughts get once we have time to relax and let our minds wander. And I love the moments when my mind wanders and I go with it, however I don’t get anything done here during those moments! So I believe the moral behind this is that no matter how bad things seem to be, there is always a reason for everything – this is my life motto now, and I really do believe it! Not a bad thing seems to go by that I don’t (sooner or later) see that there was a reason for it. Usually a good life lesson!