How many of you know what this is:

The head of a dino, body of some crazy speckled fish-like-thingy, legs of a chicken – runs like the wind, but never seems to be going in a straight line (loves spinning in place with several others at a time). It’s a Guinea Bird/fowl.

We purchased our first ones a little over 10 years ago and got the surprise of our life. The first came to us as babies, looked almost like the baby chickens until t

hey started to “form”. Early on their heads looked strange – but, as they grew, the noise they made was even worse than their head. The eggs are not very good for breakfast but, like duck eggs, make great noodles. They are shaped like a huge upside down teardrop, short legs but man could they cruise!

It’s a summer Saturday evening, cocktails by the fire pit, and then it happened. We have a huge circular driveway around our house, of which the guineas took full advantage of – the race was on!

Sun setting, frogs having a party down in the pond croaking away, faint call of a coyote in the distance (yea – stay there!), and the guineas were at full speed. Three of the dino-birds started racing around the house via the driveway. They would run around about 3 times then stop in the center of the yard/drive and start spinning in circles! WWHHAATT?? I had never even heard of a guinea before we bought them, but they were supposed to be good pest controllers. So what was with the racing and, more important, how could they spin around like that without falling over? They looked funnier than a dog chasing its tail – and that’s funny! It was a mystery. 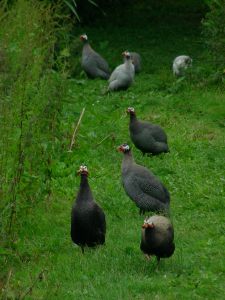 Of course, we never once tried to stop them. It didn’t seem to be hurting them, they actually seemed to like it (could tell by all the squawking they were doing) so no harm no foul (ok, bad pun). We also had the issue of not being able to stop laughing at them (biggest reason why we didn’t stop them). Then, of course we all picked a bird and watched the races till the sun set.

When the sun was finally down low enough for the yard light to come on, they finally settled down. This also meant another oddity of them – they flew up and perched in the tree at night. Chickens do not do that! They like to perch on racks we built in their barn, but you would never find them up in a tree. The biggest reason why not is that they can’t get their butts up there. Well, take another look at this silly bird – how does it get off the ground shaped like that? Have no clue, but they do.

There are a couple of great benefits to having them. 1) They are better guard dogs. Anything odd and they sound off – person, vehicle, or critter – doesn’t matter. If it’s out of the norm and they will let you know. 2) The best at pest control! You should see them rip apart a mouse, snake, or a grasshoppers doesn’t matter to them. If they can catch it, it’s theirs. They will beat the snot out of it till dead. Grab it, throw it in the air, stomp on it, or split it (literally) with a fellow guinea….ahh, bonus protein meal.

Rattle snakes are in Colorado, but we have never (knock-on-wood) seen one on our property. We love our guineas. Think we will keep them in stock (pun intended).

5 thoughts on “IS IT REAL? A BLAST FROM THE PREHISTORIC PAST? A BIRD, PLANE, OR SUPERMAN?”