We are so tired of theft we could just scream!  It is not because of virus issues; it is something that has been building up over multitudes of years.

Two more of our hens were killed in the last two nights.  It took me until today to figure out how the monster(s) is getting in.  The white hen disappeared, leaving just feathers – the first clue of the perpetrator.  This morning it was our red Hennie, and I found her gutted under some sheet metal in the back corner of the chicken barn.

We have gone through great lengths to make sure our chickens are safe from the monsters in the night.  It had been working reasonably well for the last year or so.  Apparently, they have created a new gap in a far corner that I would not have found had it not been for the corpse.

We try very hard to follow the live-and-let-live motto.  However, when we are down (sorry – were down) to only four birds, it’s just wrong for the beasties to attack them.  We have prairie dogs, rabbits, mice, and various other critters very near our barn on which they could have feasted.  That would not have bothered me at all.

So, today, to try to bring our thief to justice, we are sharing photos in hopes that someone will spot this thug (and its gang) and put an end to our injustice!  Here is the criminal: 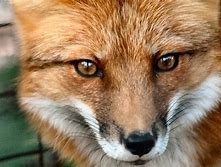 Don’t be fooled by that innocent, cute look on its face – it is a natural-born killer!  You might even find it hanging around with this murdering mob:

(Ragged bunch of gangsters if ever I saw one.)

If you happen into their local watering hole, you may find them with the lesser thieves who only nab eggs and babies:

Notice that one even wears a mask to try to hide its identity – but I know who it is.

Please, keep an eye out for these dangerous killers and help to bring them to justice.  In the meantime, we will be having a memorial this Friday to morn the loss of our dear Hennies (beers and Yahtzee will be provided – HOWEVER no more than one at a time in the porch please.).

(Yes, I did get stilly in here, and we did lose two chickens, but it is live and let live for us, so we will forge onward with humor wherever I can find or provide it.  My wish is that I put a little smile on your face for just a moment today.)

There are several things I wanted to share today, but my best bet became “an extra pair of eyes.”

This is not really something you can buy through Amazon, but some days I wish I could.  There are a number of times, during any given year on a farm, where some extra set of eyes would come in handy.

We do a large amount of bartering with a variety of friends and family.  We were lucky in the fact that our in-ground planting in the greenhouse provided us with a ton of food.  This year it was needed more than ever as it is the first time since we bought the farm that we are without fresh farm eggs.  Fricken coyotes and foxes picked them all off (even my beloved turkey) in one afternoon.  Brazen jerks did it in broad daylight too.

Some days you just cannot make sense of something that happens, this was one of those occasions. We took major precautions over the last several years to upgrade our poultry pens.  We taught them all to go into the barns at night where they were closed up tight.  We added a 360-chicken wire, attached enclosure for them to wander in and out of at will.  The only thing we did not consider was human intervention.

Xcel Energy and W.A.P.A have access through our property to get to their overhead power lines.  Both have been down in the lower neighbor’s field making all kinds of racket changing out poles and lines.  The best part of this is that they had managed to scare off all the wild critters that were hanging out in the swamps – including foxes and coyotes.

Roughly three years now we have not heard a yip or howl from either of the two groups to our joy.  This turned out to be a curse.  Yes, it was great we did not have to worry about them attacking our critters, but we became complacent.  I would open the doors up and let the critters roam all over the farm because I believed their predators to be gone.  Oh stupid me!

Once nice summer day with none of the worker crews around, and our whole flock (except the two chickens that hung in the cat barn) was taken out by the monsters.  It took no more than an hour for the chickens.  The turkey was nabbed by a coyote later that same afternoon. (He was carried off, and he was huge!)

So my share today is to get more eyes on your property.  Friends or neighbors driving by.  Neighbors close enough to notice strange movement.  We are even thinking about installing motion sensors with cameras in all of our hard-to-see areas.

We have been able to exchange fresh fruits and veggies, canned goods, and homemade goodies for eggs and the like.  The pantry is not looking too bad, but I still feel totally bummed about our loss, and missing the wobbly birds that would come running when I called them.

Please also check me out on: https://wordpress.com/post/lifelessonslived.com  for things I have lived through in my life.

Have you seen the signs?

There are many out there: (please do NOT click on the links until the very end-thank you.)

Cicadapocalypse: What you need to know.

These two were just in today’s email information.  Then there are the other signs:

What is a supermoon?

Are you ready to handle the worst signs yet?  Hold on to your butts: 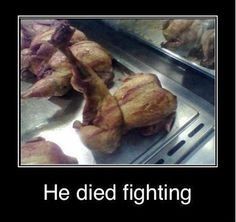 (Tried posting this at the edges of my gardens as a warning sign for our birds…this is what I got in return: 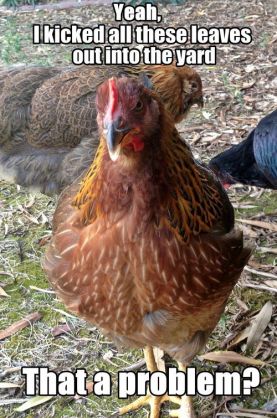 I really got worried when they ganged up on me and employed music to terrorize me:

When all else failed they came at me with this:

FINALLY – I saw the signs!  Not happy about them – ok, and a bit scared, but definitely not happy!  Dang chickens.

How many of you know what this is:

The head of a dino, body of some crazy speckled fish-like-thingy, legs of a chicken – runs like the wind, but never seems to be going in a straight line (loves spinning in place with several others at a time). It’s a Guinea Bird/fowl.

We purchased our first ones a little over 10 years ago and got the surprise of our life. The first came to us as babies, looked almost like the baby chickens until t 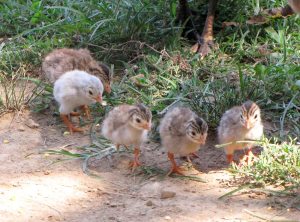 hey started to “form”. Early on their heads looked strange – but, as they grew, the noise they made was even worse than their head. The eggs are not very good for breakfast but, like duck eggs, make great noodles. They are shaped like a huge upside down teardrop, short legs but man could they cruise!

It’s a summer Saturday evening, cocktails by the fire pit, and then it happened. We have a huge circular driveway around our house, of which the guineas took full advantage of – the race was on!

Sun setting, frogs having a party down in the pond croaking away, faint call of a coyote in the distance (yea – stay there!), and the guineas were at full speed. Three of the dino-birds started racing around the house via the driveway. They would run around about 3 times then stop in the center of the yard/drive and start spinning in circles! WWHHAATT?? I had never even heard of a guinea before we bought them, but they were supposed to be good pest controllers. So what was with the racing and, more important, how could they spin around like that without falling over? They looked funnier than a dog chasing its tail – and that’s funny! It was a mystery.

Of course, we never once tried to stop them. It didn’t seem to be hurting them, they actually seemed to like it (could tell by all the squawking they were doing) so no harm no foul (ok, bad pun). We also had the issue of not being able to stop laughing at them (biggest reason why we didn’t stop them). Then, of course we all picked a bird and watched the races till the sun set.

When the sun was finally down low enough for the yard light to come on, they finally settled down. This also meant another oddity of them – they flew up and perched in the tree at night. Chickens do not do that! They like to perch on racks we built in their barn, but you would never find them up in a tree. The biggest reason why not is that they can’t get their butts up there. Well, take another look at this silly bird – how does it get off the ground shaped like that? Have no clue, but they do.

There are a couple of great benefits to having them. 1) They are better guard dogs. Anything odd and they sound off – person, vehicle, or critter – doesn’t matter. If it’s out of the norm and they will let you know. 2) The best at pest control! You should see them rip apart a mouse, snake, or a grasshoppers doesn’t matter to them. If they can catch it, it’s theirs. They will beat the snot out of it till dead. Grab it, throw it in the air, stomp on it, or split it (literally) with a fellow guinea….ahh, bonus protein meal.

Rattle snakes are in Colorado, but we have never (knock-on-wood) seen one on our property. We love our guineas. Think we will keep them in stock (pun intended).