For those that know how to sow.

The first thing you need is a hoe.

A sew is not sow,

And a so is not sow

When planting you just need to know.

Yes, that was a bad one (thank you mom), but I had to do something strange.  The season begins again – the garden season that is.  If you have been following me, then you know this is an actual season, at least for those of us that farm or garden.  It is much longer than the regular four seasons as it encompasses spring, summer, fall, and even sometimes winter.

We have begun our seed starts.  This year we are going a bit slower and much smaller than the last several years due to many factors.  The largest of which is our continued cleanup after the tornado.  We are still working on what to do with the greenhouse.  Several ideas popped up during our regularly scheduled Friday night game night and libations:

That was just a few of the more sensible ideas, after those it just got ridiculous.  I’m pretty sure that the out-of-control laughter instigated most of the sillier ideas (although I still like the hot tub idea).

Once we settled down, we decided that putting the cover on would be best.  Then, after doing what I love – research, I discovered something new.  They have created a greenhouse cover that can be done in “sections” – YES!  Took them long enough to come up with this fantastic idea.  Now if a part gets damaged, we won’t have to replace the whole thing – just that section – woohoo!

We have also been looking into different types of mini-greenhouses.  We usually start our seeds in the house, and the starting process takes over the kitchen island, the countertops, the south porch (has a perfect HUGE picture window to the south), the south house window, and where ever else we can find (or make) space.  The house basically becomes an indoor greenhouse for seeds and seedlings for about two months. 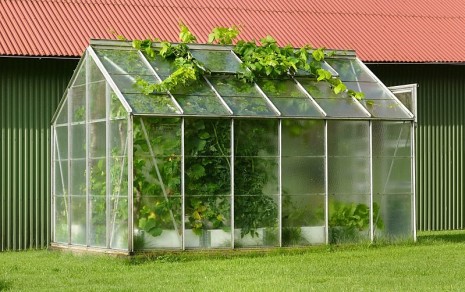 If you have been following either of my blogs, you know my sister is a bake-a-holic so taking over her massive kitchen for that long just drives her crazy.  She is all good and calm at the start, but by the end of the first month, she starts to growl.  Going into the second month, she is ready to shove them all out in the cold – “Grow or Die” – our farm motto.  So after some more Friday game night deliberations, the plan of a separate seed start structure would be more feasible.

Next step was to boil it all down to pros vs. cons and see where we stand.  The mini-seed start shop was a “go” from the start because:

Looks like the seed sowing shop is a go – now we need to settle on which one.

Back to the greenhouse cover, we have decided to go with the sectional stuff.  It’s a bit more expensive, but we believe in the long run it will work out much better.  The fun part will be putting it on.  The structure we have is pretty much intact (the 2”x12” base needs to be redone on the east side – west is untouched – damn twister!), but we still have to put guide tracks on the arcs we have.  Good thing we have a two-section scaffolding that should reach most of it (the very peak needs an additional step ladder to get up there).

For those that know how to sow.

The first thing you need is a hoe.

A sew is not sow,

And a so is not sow

When planting you just need to know.

(Just had to throw that bad poetry out one more time – Love ya mom!) 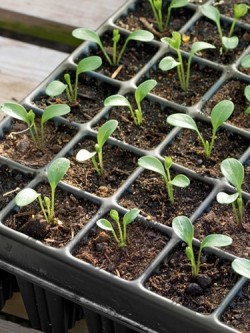 You can also check me out at:  www.lifelessonslived.com for all the fun things I have learned in life.