I just love when I stumble across something that I did not know before.  Anyone after the age of fifty can relate to this.  I love learning, so it is a pleasant surprise when something like this happens:

They listed other little factoids, but I knew all the rest.  You may find them interesting if you have never been around a domestic turkey.  Oh, and a been there-done that word or caution: YES, THEY CAN BE VERY MEAN!  Then again so can a rooster.  We had a rooster that would purposely hide behind anything the minute he heard my daughter’s voice.  When she got close enough he would come charging out at her, head down, wings flailing, and ready to throw spurs first into her legs.  Scary, but I burst out laughing every time because he never bothered me.  Could be because he came at me once, I kicked him and told him he would be freezer meat if he didn’t knock it off.  He never tried to attack me again.

We had one turkey, Whiskey was his name, and he would follow me around everywhere outside.  The first time I sat up in the garden after weeding away and found him squatting behind me, it freaked me out a bit.  Then it dawned on me that we raised almost all of our birds from babies.  He was one, and so I was kind of his mom.

My daughter was afraid of him too.  Not because he would try to attack her, but because he was big and scary when he would “fluff” (as we called it).  Males get all poofy, the tail feathers go up and spread out, the snood gets huge, long and droopy, and their whole body seems to swell up with pride in themselves.  Then they make this weird puffing noise (This site: http://www.wideopenspaces.com/sounds-turkeys-make-and-what-they-all-mean/ provides all the different sounds.  The cluck is the closest to what it sounds like.) while they follow you.  I just wrote it off as having too much air from being all puffed up like a balloon.

This lovely Thanksgiving Day, make sure you give thanks to this wonderful bird.  They are a real wonder of nature – like how can something that fat get all the way up in a tree? 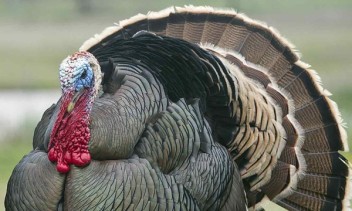 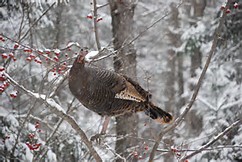 (These two are wild ones.) 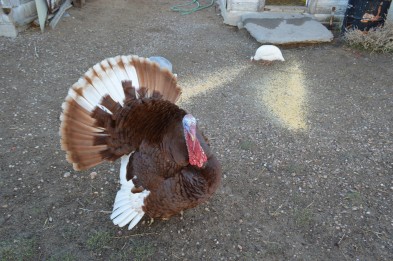 (This was our prize – Whiskey.  Oh, and if you read the full article, it mentions Guinea Birds in Turkey.  That is what the white bird is behind him.  Close up they have the head of a dinosaur.)