(Before you read this, think of the old Dick Tracy or Dragnet style of storytelling – it will help-lol.)

THE CITY: Just outside of Brush, Colorado

It was a Monday just like all the others, or so I thought. Most of the day went off without a hitch. Get up, get ready for the day, feed the critters and start business. Every weekday afternoon (except holidays and teacher only work days) at 3:30 ish go wait for the bus to drop off my grandson Nathan.

I waited, he was delivered, and then I decided that there was storm front coming in so I went to do up chores early. That was when the game changed. The guineas were screaming of something wrong. They were all on top of the chicken coop instead of their normal racing on the ground – something was definitely amiss.

I couldn’t tell where the trouble was, as guineas do not stand still when they are scared. They will gather in a bunch and then mingle and scream at each other. Like that will fix the problem? I began trying to gather all the fowl into their barn and that’s when I saw it – DUN DUN DAAAA:

It was on the north end of the coop, in the path that I created around the greenhouse. It was just as scared of me as I was of it! We stood for just a moment locked in each other’s gaze. Then it turned and headed for the greenhouse and feed shed – oh oh! They move faster in the snow than I had expected.

I quickly reached for my cell phone to try to nab the critter (ok, just a picture of the critter), but I was too slow (story of my life). It was now hiding behind an old wheelbarrow that was leaning against the feed shed – score one for the opossum!

We have a gap in the base boards of that area, so I snuck around to the inside of the shed, still hoping to get a shot at it (oops, I mean of it -LOL). It was a crafty critter, all I had a clear shot of was its butt.

I decided that this beastie had won this round – but I will be ready for it in the morning! 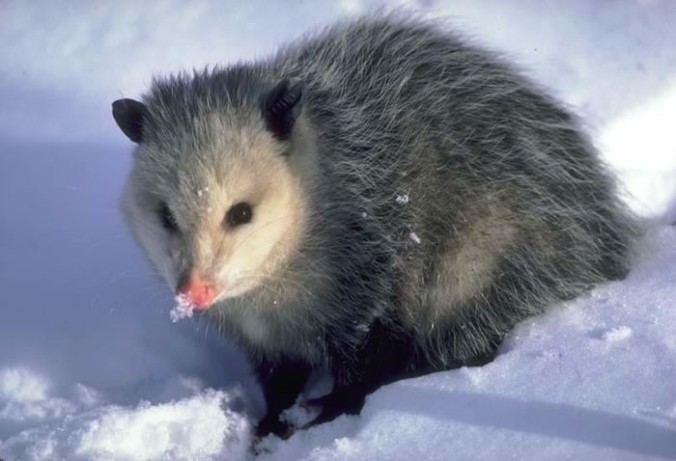 (FYI – it is morning 1/19 and it is gone – boo hoo. First time I/we have every had one up at the farm. I wonder if it is a shemale looking for a baby maker house? Hmm – will have to keep an eye out for it – and maybe babies?)