I know it is moth season (yes, we have a season for them), and I know that they help to feed the birds; but do they have to be so nasty?  And, what is there poop made of?

The worst thing of all is the poop they leave behind – EVERYWHERE!!  What the heck is that stuff made of?  I swear it is worse than tar to try to get off, and it ends up in the strangest places.  I found several yuckies on my DSL this morning, and the thing sits upright on a box (better air circulation since it gets kind of hot), and yet it has two trash marks from Millers on it. 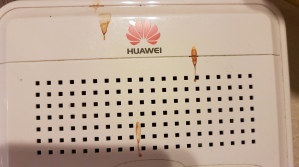 Have you ever tried to clean that stuff off of something?

I just don’t get how something so temporary can leave such a lasting mess.  With the large amount of them appearing this year, we will be trying to clean up after the little monsters until Christmas!

The other thing I hate about them is when they pop out by the dozens in the most unsuspecting spot.  I was cleaning up the gazebo and just shifted the chair cushions and got bombarded by a gang of them.  (Yes, I have decided that a group of more than one is called a “gang” because they are so destructive when gathered together.)

If any of you out there reading this has some great idea on how to get rid of these nasty leftovers easily, please share so I can tackle this mess.  Thank you!