Apparently, I am going to have to have a talk with my house critters AGAIN!  I don’t know if it is because I am a farm girl, because I love critters, or because I instinctively watch nature, but something is trying to tell me something.

This time every year we get critters in the house:

We know the routine of the mice (have not found their entry point yet – grr!), and traps work perfectly according to the barn cats (they get the snapped goodies).

Ladybugs only come in every few years, and they usually bunch in the corner of the ceiling.  The weird part is they disappear after about a month, and not a single body is found anywhere in the house??  By the time they disappear, it is very cold and/or snowy outside, so I am sure they do not go back out – so where is their “panic” room? The issue this year is my spiders.

Now I really thought my spiders and I had a pretty good understanding:

“Stay on the ceiling, up out of reach, and you live.  Get down to my feet, and you die.”

Simple, easy to understand, a beneficial agreement that has been adhered to for almost a decade now.  At least that was until about October of this year.  I have been killing (just by stepping on) at least five spiders per week since about the first of October.  WHAT THE HECK??  They are in our home year-round but understand that their place is on the ceiling and up in the skylight.  Why are they all down at my feet?  Do they all have a death wish now?

Most of the above pics are small spiders.  The Garden (Orb – the one with the yellow stripe legs) spider is bigger and usually hangs out in the barn or greenhouse, basically an outside critter just like the Crab spider (the one with the pointy back that looks like a shell).  The other three, along with the Daddy Long Legs are found in our home.

I started this post in early October.  It is now the 20th of November, and I have still been finding at least 3-5 per week down at my level for a death sentence.  This one I almost stepped on BARE FOOTED this morning heading to the bathroom: 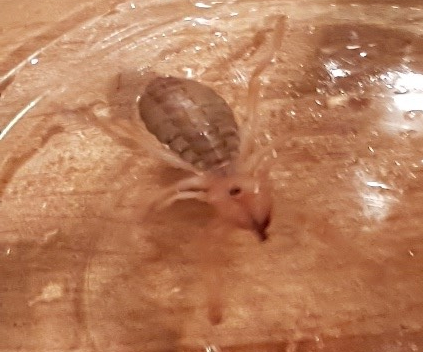 I can’t stand these guys!  They are not native to Colorado and do not like the cold (it will die in the cold or, as I found, in too much water).  They are called Wind Scorpion Spiders, and we have been told that they most likely came in on military gear coming back from a very dry desert climate.  THEY DO NOT BITE HUMANS, which was the first thing we had looked into.  Never-the-less I just can’t stand looking at them.  This one is normal size – about the size of a half-dollar (that’s with leg and mandible reach).  I even prefer the garden spider to this thing, maybe because it does not look like a spider to me. (Got to tell you I am creeping myself out right now – yuck!!)

I have seen a Wolf spider too up-close and personal for my liking, so I know about them.  Black Widows were in the pine bushes in my home in Denver, so I know what they look like and where to watch for them.  I was bitten by a Brown Recluse, so I am extremely wary of them.  But none of those freak me out like the Wind Scorpion – not sure exactly why?

The simple fact is that too many spiders have shown up not just in the house, but specifically downstairs (my turf) and at my stomping level.  This is not the norm and not in our agreement!  I am pretty sure they are all trying to tell me something about the environment, but my spider-eeze is not working very well this year.

So, for now, I will continue my daily discussions with the general household insect staff about the house rules and how to avoid death.  I hope that they will all just settle down in the fact that I do not have their natural instincts regarding the ecosystem, I cannot speak their language, and I will have to deal with whatever good Ole Mom Nature decides to throw at us.  Wish me luck!

5 thoughts on “ALL RIGHT, What Are You Trying To Tell Me?”